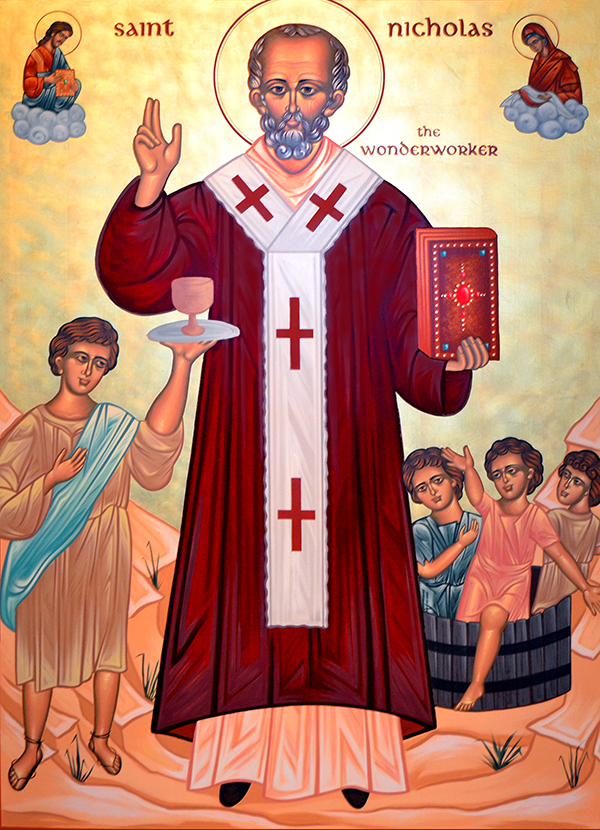 We are at that time of year again, the time to joyfully celebrate the Feast of St. Nicholas and Christmas, the Incarnation of our Savior, Jesus Christ. Last year about this time I told you about the legends and miracles attributed to Saint Nicholas and why the Greek Catholic Union chose St. Nicholas as their patron. Who is this person named Nicholas? Where did he come from and what kind of person was he?

In the latter part of the third century Saint Nicholas was born in the village of Patara, in Asia Minor, on the southern coast of what is today Turkey. He was raised in a good Christian home by his parents, Theophanus and Nina. His uncle, who was the Bishop of Patara, realized that Nicholas was leading a holy life and had sufficient learning to become a priest. His parents agreed and Nicholas was ordained a priest at the age of twenty-one. He led a simple life as a priest devoted to serving the poor and needy. When his parents died, he inherited their property, which he sold to help the poor.

Nicholas decided that he wanted to live a monastic life in the Holy Land. After a brief time, he returned to the city of Myra when the Bishop of that city died. A council to elect the new bishop could not agree on a candidate to be the next bishop. One bishop in a dream was told to stand at the doors of the church and select the first man who entered and make him the bishop. At Matins the next day, Nicholas was the first to come into the church. Nicholas, being a man of great humility wanted to refuse the appointment as bishop. There is a tradition that says Nicholas was so troubled about accepting the episcopacy that he only gave full consent on the day before his episcopal ordination, after having a dream. In this dream Nicholas saw Jesus Christ handing him a Gospel Book and the Mother of God holding a bishop's omophorion. Many popular icons of Saint Nicholas have Christ and the Mother of God pictured on each side of Nicholas depicting this dream.

Bishop Nicholas was a model of Christian living and leadership. He fulfilled his tasks as preacher, defender of the faith and provider of the poor. Saint Nicholas did not have an easy life as a bishop. Though he and the people were persecuted, Nicholas brought courage and spiritual comfort to them. In short, we can describe Nicholas, his life, and his ministry with these three actions… Nicholas served his church and his people as their PRIEST, their PROVIDER, and their PROTECTOR.

Today we try to live our Christian lives in a world that increasingly appears to be a world without God. We can turn to St. Nicholas, our Patron Saint, for inspiration on how we might become more like him—he lived his life focused on God and his fellow Christians. And is that not the basic message of the Gospel: to love God and to love our fellow human beings.

Nicholas lived to an old age and died on December 6, 343. Let the life of St. Nicholas influence the way we live so that we can gain "greatness through humility and wealth through poverty." (Tropar of St. Nicholas) O Holy Father Nicholas, pray to God for us!