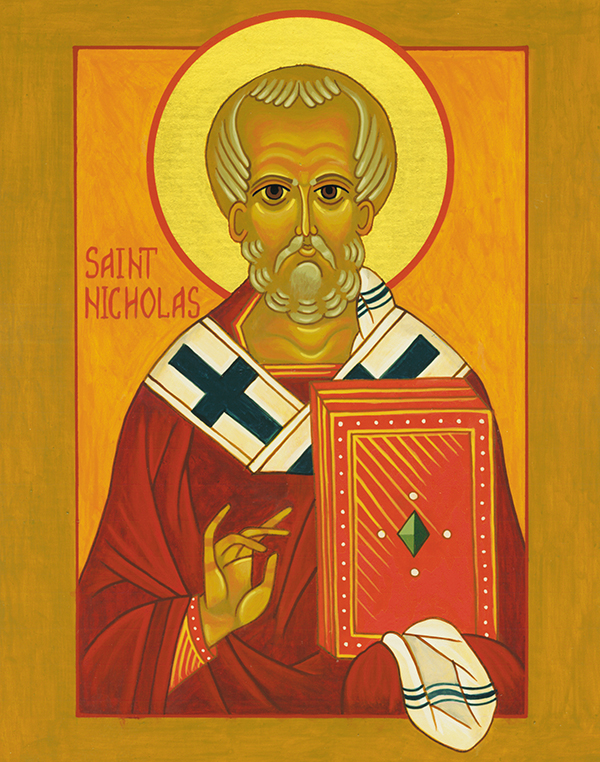 According to Wikipedia the Golden Age of Fraternalism in the United States occurred in the latter part of the 19th Century and into the first part of the 20th. This is also when the greatest number of Rusyn immigrants from the Carpathian and Sub-Carpathian region arrived in the United States, between 1870 and 1914. As I discussed in my last article this group of people wanted to ensure that its members were cared for financially, to provide the means for a good education, to aid their churches, and to promote friendship among its members. The fraternal organization, GCU, was thus formed in 1892. The Mission Statement of the GCU is “Protecting Families, Promoting Faith and Fraternalism, Strengthening Communities.”

Saint Nicholas, the Archbishop of Myra, 270 AD – 343 AD was involved in these fraternal activities long before the 19th Century. Nicholas was born into a wealthy family, and upon the death of his parents Nicholas, an only child, distributed his parent’s estate to the needy. This was only the beginning of Nicholas’ fraternal activities. It is no wonder that the founders of GCU chose St. Nicholas as their patron.

We have all heard of the many miracles performed by St. Nicholas the Wonderworker. There was the time when the people of Myra had no food and Nicholas appeared in a dream to a merchant to divert his ship loaded with bread from Italy to Myra and fed the people of the city. Another story of the great care St. Nicholas had for his people occurred when travelers sailing on a ship from Egypt to Lycia encountered a storm and Nicholas saved them. In the year 325 at the Council of Nicea Nicholas defended the Faith by speaking out against Arius who held that Christ was not divine but was a created being. So, like the Mission Statement of the GCU, Nicholas protected families, promoted the Faith, and strengthened the community of Myra, where he served the people as bishop.

Probably the most familiar miracle of Nicholas is when the miners in Jacob’s Creek, Pennsylvania refused to go to work on the Feast of St. Nicholas in 1907, and instead went to church. A huge explosion occurred in the mine and nearly 200 miners were buried in the mine while the 80 men who went to pray at the Divine Liturgy to honor St. Nicholas were spared. There were several times when the intercession of St. Nicholas in troubled times of the GCU guided the organization to make the correct decisions.

The “miracles” of St. Nicholas continue to happen down to this day. I would like to tell you of a time, not too long ago, when the intercession of St. Nicholas may have saved my life and a priest friend. Three of my brother priests and I were traveling in Italy and we decided to visit the remains of St. Nicholas in Bari, Italy. At the same time I was visiting friends from Livorno, Italy who warned us to be careful because it was a dangerous place to travel; so, two stayed with the car and two of us decided to walk to the St. Nicholas Chapel. We walked through some narrow alley ways and eventually ended up praying at the remains of St. Nicholas. As we left the Chapel two police officers stopped us and said they would escort us. We said it wasn’t necessary because we arrived without any problems. The police insisted and escorted us with their hands on their guns. They told us that it was a “miracle” that we were not robbed or beaten. I believe that St. Nicholas performed another miracle that day. I was recently told that part of Bari is very safe today.

As we celebrated the Feast of St. Nicholas on December 6th and prepare to celebrate the Incarnation of our Lord, Jesus Christ; follow the example of St. Nicholas, “a model of faith, an image of gentleness, and a teacher of moderation” (from the Tropar of St. Nicholas). He shows all of us, young and old, how the true Christian life should be lived.