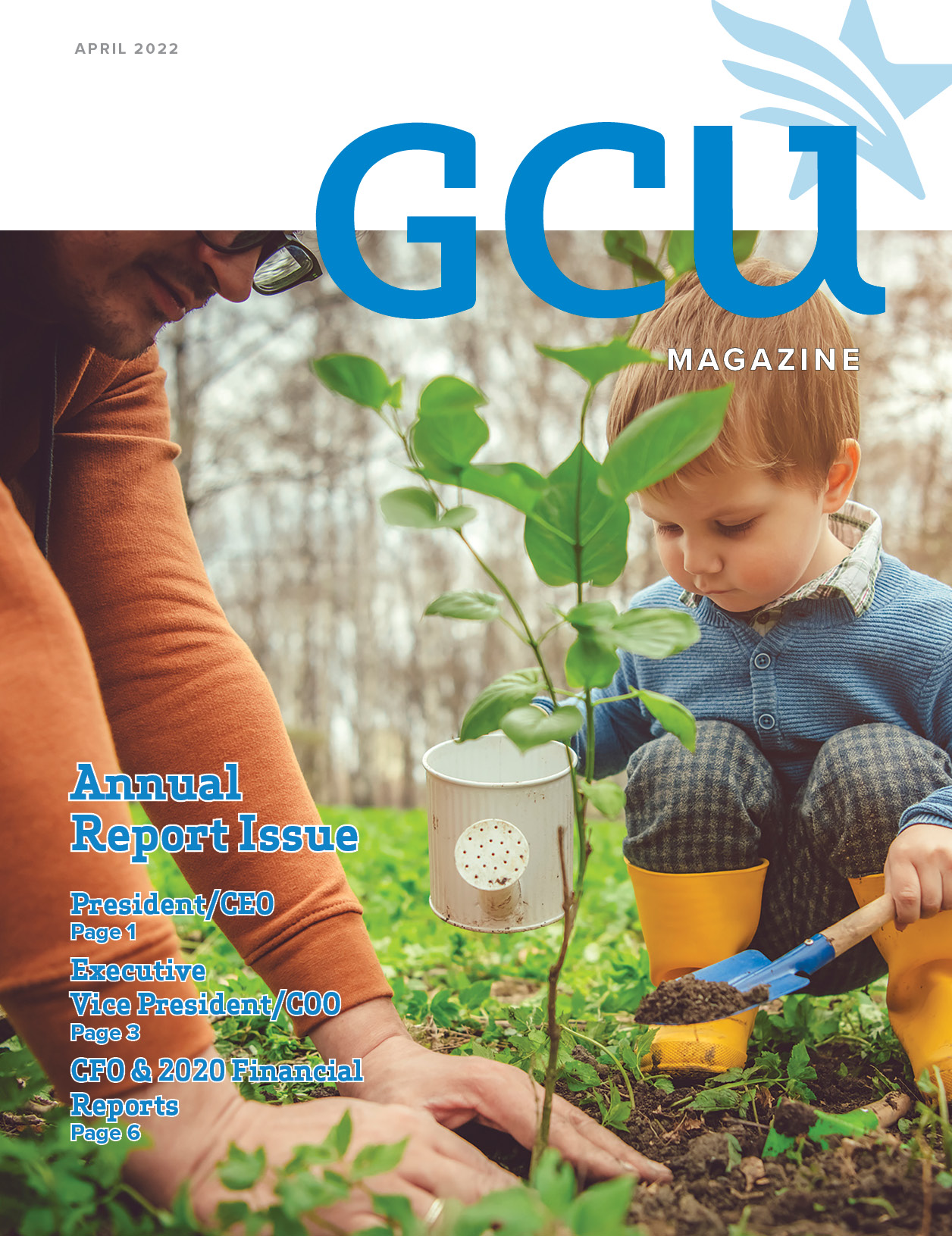 Welcome to the 2022 Annual Report issue of the GCU Magazine!

My article in the February issue of the GCU Magazine informed you that 2022 marks the 130th anniversary of the GCU as our Society was founded on February 14, 1892. In addition to our anniversary, through the Grace of God and oversight of our Patron Saint, St. Nicholas of Myra, we can also celebrate the fiscal year of 2021 being the most successful financial year in the history of the GCU.

GCU’s total assets grew 9.7% in 2021 and now total $2.4 billion. Surplus totals $209.2 million representing a 14.6% or $26.6 million increase. Net income after refunds and net capital gains/losses of $33 million was recorded for year-end 2021, the highest ever recorded in the Society’s history. A full detailed report and commentary by Chief Financial Officer Tim Demetres, is published on page 6. My sincere appreciation to our members and agents for your continued faith, trust and confidence you exhibit in the GCU—that is the cornerstone to the GCU’s continued path of success!

In addition to the outstanding financial performance of the GCU in 2021, the GCU Holding Company, Inc. also experienced a substantial improvement. Seven Oaks Country Club, Inc. recorded the highest revenues in each area of the Club’s revenue centers since it opened in 1978. Such revenue areas that experienced increases included dues, food and beverage sales, carts and green fees and golf pro shop merchandise sales reflecting an increase of $988,200.00 compared to year end 2020. Coupled with the controlling of expenses a net profit before depreciation of $223,600.00, was recorded. Please note that a Payroll Protection Plan Loan (PPP Loan) also assisted noting that this loan was forgiven. The improved financial position of Seven Oaks is attributed to the recent renovations to the Clubhouse and improvements to the golf course over the last several years. Unfortunately, the COVID-19 pandemic may have also played a role as families and individuals were seeking outdoor entertainment and a safe environment under the various concerns associated with this virus and restricted guidelines established by the Center for Disease Control and federal and state authorities.

The GCU Real Estate Company, Inc. also experienced activity in 2021 as three lots were sold. These lot sales will improve the financial status of this subsidiary that will specifically have a positive impact on the balance sheet. Only seven lots remain in the Congressional Place single family development. Pinehurst Village, a multi-family home development within Seven Oaks, also experienced several sales in 2021. An additional four units is under construction with two units being presold. This community is being constructed by Castlebrook Development. Additional information on the housing development will be presented in the June 2022 issue of the GCU Magazine.

Our Chief Operation Officer Scott Schuetz, will also be providing to you some insight of what is happening within the GCU, to better serve our members and agents, with a focus on the GCU’s continued growth and digital transformation. Please review Scott’s article on page 3.
Over the last several years, the GCU’s Fraternal Programing on a National, Lodge and District level have been hampered by the COVID-19 pandemic. The safety of our members is first and foremost and decisions to suspend requirements were made in accordance with the Center for Disease Control (CDC) and federal and state guidelines. We will soon be giving the “green light” to our lodges and districts to return to a state of “business as usual”! We thank many of our lodges and districts that continued to provide fundraising and volunteer programing in support of their parishes and communities despite the pandemic challenges.

As we thought events couldn’t get worse after experiencing the effects brought about by the worldwide pandemic, the war in Ukraine is now “center stage” as we are once again witnessing death along with mass destruction of Ukrainian cities that I felt I would never see in my lifetime. It is heartbreaking to witness such devastation and the many families being displaced. Destruction not caused by a force of nature, but by Russian military invasion of this sovereign nation. This event certainly “hits home” as the very European roots of the GCU can be traced back to the first generation of immigrants migrating to the United States that came from the many villages located in the Carpathian Mountains of eastern Slovakia and western Ukraine.

In the last several years the GCU Foundation has solicited donations from our members to provide financial support to many organizations that have supplied much needed humanitarian relief to families and individuals suffering losses due to natural disasters and other causes. The most recent effort was in assisting the victims of the tornadoes that swept through the states of Oklahoma and Kentucky and the surrounding area in early December. The GCU’s Board of Directors also committed Matching Funds to the many fundraising programs implemented by the Foundation. Soon after the war in Ukraine began, the GCU Foundation once again launched a fundraising campaign to support the humanitarian efforts so deeply needed. We are so pleased to announce that through the generosity of our membership and the $50,000.00 Matching Funds commitment of the GCU’s Board of Directors, $117,328.00 will be distributed amongst the Ukrainian Catholic Archeparchy, United Help Ukraine and the Slovak Greek Catholic Eparchy of Mukachevo. The funds raised for this effort is the most ever and on behalf of the GCU Board of Directors and the people of Ukraine, we thank you for your generosity!

As I announced in the last issue of the GCU Magazine, I will be presenting some “tidbits” of historical information in each of my articles. From our humble beginnings and noting a multitude of accomplishments and challenging events that occurred that GCU successfully navigated through, in celebration of the organization’s 130th Anniversary.

Did You Know?
Our Humble Beginnings
The initial death benefit was set at $400.00 per member.
Annual conventions were held as delegates from each lodge attended setting the course of the GCU and its future. The Conventions were initially established as the supreme ruling body of the GCU.
Discord among delegates at the sixth Convention held in Johnstown, Pennsylvania led to a faction of GCU defeated members running for office and members of three lodges established a new organization, the “Sobranije” or the United Societies of the U.S.A. founded on March 29, 1903.
The official newspaper of the GCU was titled the “Amerikansky Russkij Viestnik” (ARV), in English the “American Rusin Messenger”. This publication provided very informative articles that were beneficial to the arriving Rusin immigrants to the United States. The Kalendar (Yearbook) was another publication by the GCU. I recall in my youth, my Dad would ask my Mom if we received the “Viestnik”!
The first editor of the GCU’s newspaper was Paul J. Zatkovich as the operations office, newspaper office and printing plant were located in Mahanoy City, Pennsylvania from 1892 through 1896. The entire operations moved to Scranton, Pennsylvania in 1896 and soon thereafter relocated again to New York City.
After five years of existence, Greek Catholic parishes grew from one in 1894 to thirty-three in 1898 with 152 GCU Lodges established with 6,776 members.
By 1902, GCU assets topped $22,700.00.
In addition to life insurance, the GCU also provided for the payments of disability benefits to eligible members that began to be paid in 1899.
In 1902 the GCU fell upon hard times ten years into the GCU’s existence as claims exceeded assets. Through strong leadership under President Michael Yuhasz, bylaw revisions and a strong membership campaign organized around the feast of St. Nicholas were successful in revitalizing the GCU and saving the Society from insolvency.
(The historical information presented above was derived from the GCU’s Publication – “Opportunity Realized – The Greek Catholic Union’s First One Hundred Years 1892-1992.”)

As we are in the midst of spring, enjoy the beauty of nature as it revitalizes itself from its winter slumber. This transformation is such an astonishing feat only God could provide. ENJOY!

Please continue to pray for the citizens of Ukraine that God will provide them comfort and relief from this atrocity and will end sooner than later! Glory To Ukraine!
GOODNESS IS GREAT!
George N. Juba | President CEO 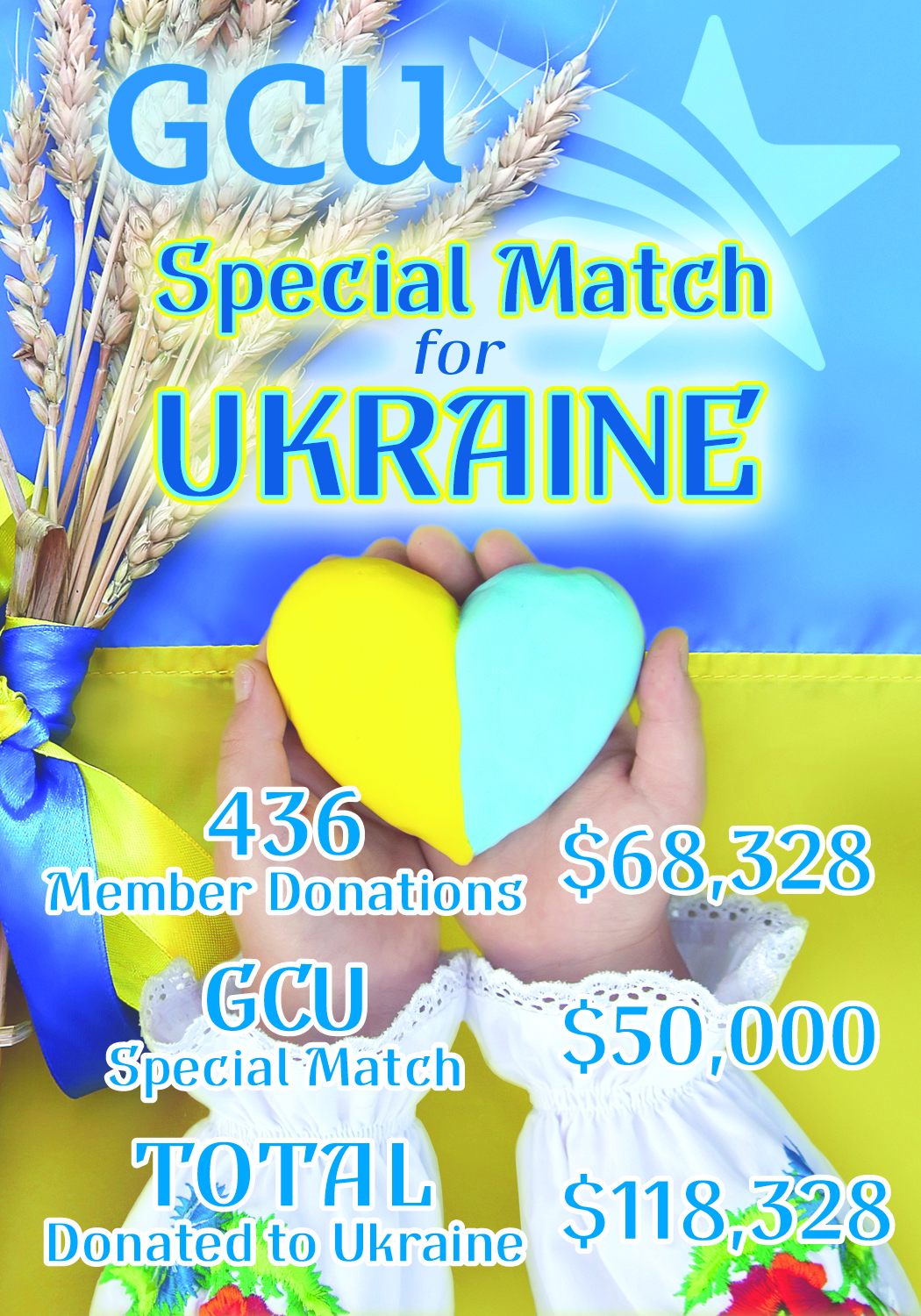